The Sign & Sound Theatre project has produced a set of Guidelines for anyone who would like to apply Innovative Bilingual Theatre techniques in their activities.

“Audience Blending by Arts” (ABBA) is a European project which aims to explore new ways of producing inclusive arts, for inclusive audiences. Through the creation of Sign and Sound Theatre, the project partners worked on bringing the deaf and hearing community together through inclusive bilingual theatre. After two years and 5 performances of the bilingual theatre play “Kukonor” in 5 countries, the project partners will share this experiment with all those interested in the artistic field and this unique theatre method.

With representatives from the European institutions working in the field of arts, culture and disability the conference will open with a policy debate on arts and inclusion. The ABBA project partners will then present the results of the project and discuss with all participants how this bilingual theatre method can be further developed. Is innovative bilingual theatre a method to combine audiences? How can we spread this theatre technique throughout Europe and European festivals?

Join us on the 4th October 2019 as we share ideas and experiences and answer these questions.

Participation in this conference is free of charge.

DLAN and CeKaTe co-produced Croatia’s first International Theatre Festival “Sign and Sound” dedicated to bilingual theatre and promotion of deaf performative arts (26 – 28 September 2018), during the International Week of the Deaf.

The programme included a round table discussion “The Role of Bilingual Theatre for Development of Inclusion and Deaf and Hearing Arts”, hosted by CeKaTe (Ivan Hromatko, PhD) and moderated by Mario Kovač, PhD. The discussion was joined by representatives from City of Zagreb’s Office for Culture, Ministry of Culture of Republic of Croatia, Association of the Deaf and Heard of Hearing of City of Zagreb, DLAN NGO, and actors from the Croatian version of “Guardians of Dreams”. In introduction to the discussion, Mario Kovač presented the results of CeKaTe’s (and ABbA’s) survey research on bilingual theatre that CeKaTe conducted after DLAN’s performances of “Guardians of Dreams”. This has opened up a fruitful discussion that showed how all institutions involved are eager to continue and develop bilingual theatre and festival of deaf arts.

After the round table, a two day festival programme started, organised by DLAN NGO.

During the festival, audience enjoyed in another bilingual performance by DLAN – “Guardians of Dreams” – and six other performances by deaf artists from China (Hong Kong), Belgium, Hungary and Serbia. After the festival, DLAN has organised a tour of Plitvice lakes for deaf artists.

We had around 200 visitors during the whole event – which we believe is a fair start to a deaf arts and bilingual theatre festival.

Photo album from the Festival is available here:

The whole Festival programme is available here (only in Croatian, so please use Google Translate): http://www.cekate.hr/program/fkzz-festival-kazalista-znak-i-zvuk/

The information about the festival was also posted on our ABbA web page (also only in Croatian): http://www.cekate.hr/program/projekti/kreativna-europa-abba-europe-teatar-znaka-i-zvuka/ 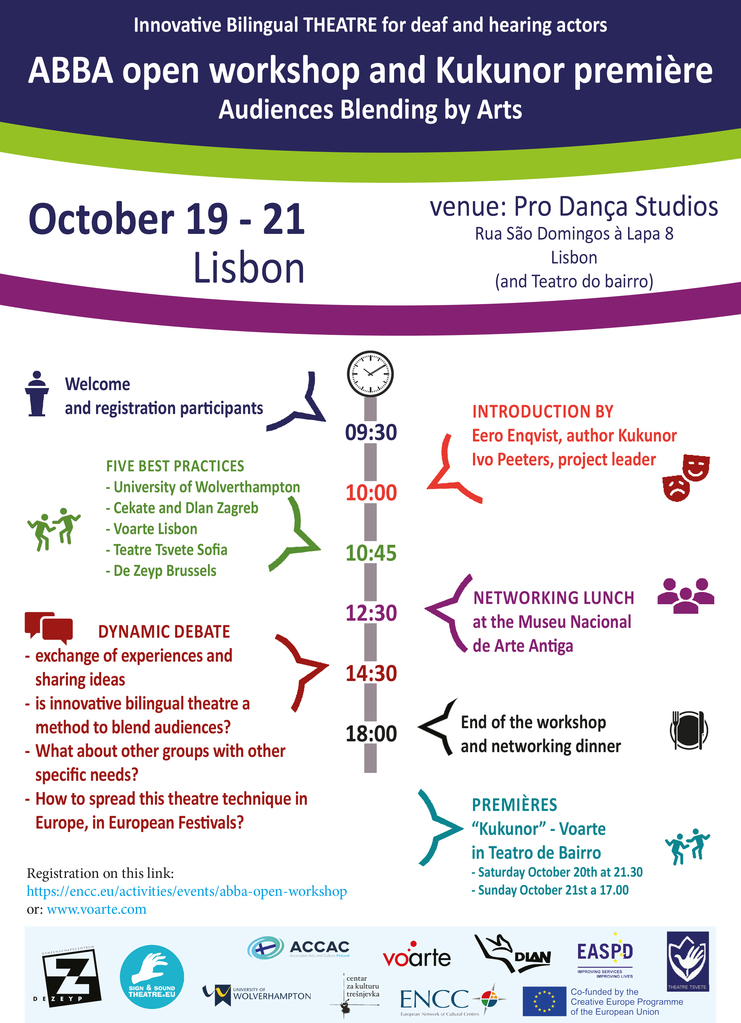 It is the first inclusive festival dedicated to the development of mixed deaf and hearing audience, and to the promotion of bilingual performances and deaf arts.

The Festival will be opened on 27th September 2018 at 18.30h by a bilingual theatre play “Guardians of Dreams” performed simultaneously in sign and voice Croatian language by deaf and hearing actors and actresses from DLAN NGO (Kristijan Ugrina, Iva Vrbos, Korana Ugrina and Lino Ujčić Matessa), directed by the president of DLAN NGO and of TFSS, Mr Angel Naumovski.

After the opening performance, the audience will have an unique opportunity to see theatre plays and performances by deaf artists from Hong Kong, Belgium, Hungary and Serbia.

Beside the Festival programme, TFSS will contribute to the development of mixed deaf and hearing audience by organising a round table discussion on the subject of “The Role of bilingual theatre for development of inclusion and of dear and hearing arts” which will be moderated by theatre director Mario Kovač PhD.

The price of a two-day ticket (valid for all 7 performances) is 70 kuna (approximately 9 EUR), and single ticket costs 20 kuna’s (approximately 2.5 EUR) Reservations and information: rvraseta@gmail.com 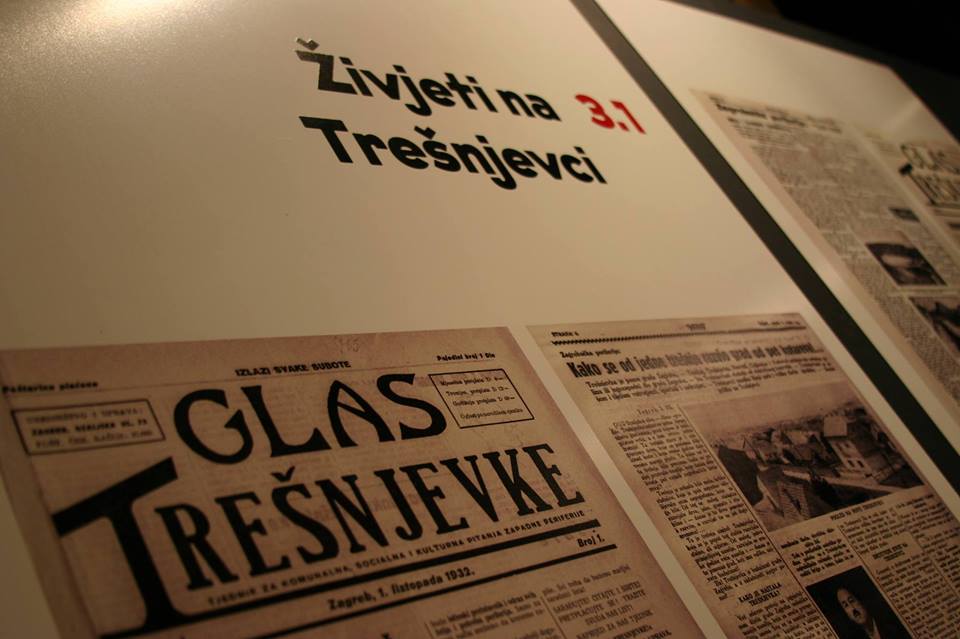 The play was developed using the method of innovative bilingual theatre (IBT).

It is a approach to dramatic text in which each character is interpreted simultaneously by a deaf and sound artist, giving equal importance to sign and voice language.

Therefore, this way we invite the deaf and the listening audience to a show in which they will enjoy it equally without the need for translation – because the whole action is performed on the sign and voice of the Croatian language.

It is located on the border of two enemy States, but also on the border of Java and SNA – where they meet deaf and including, lovers and enemies, soldiers and civilians, women and men – the show “Guardians of Dreams” invites you to know your own and other’s boundaries and Answer the questions:

Is it possible to establish contact with another human being despite the constraints?

What does it really mean to be inclusive?

Can the deaf and Can enemies become lovers?

The performance is reflected within the international project ABbA Europe. Audience Blending by Arts), namely, “merging audiences through art” co-financed by Eacea Fund creative Europe – Culture and Ministry of Culture of the Republic of Croatia (ABbA Europe 2017-1696-001-001).

Co-financed by the European Union programmes Creative Europe and the Ministry of Culture of the Republic of Croatia.

Based on the play «Kukunor and Uniku» by Eero Enqvist

Created in partnership with Theatre «MIME-ART»

Adapted and directed by: Vasil Spasov

Situated at the borderlands of two enemy countries, two soldiers will discover the Human on the other side of the fence. Despite all the external limitations – physical, psychological and emotional, the road to the Other is always worth travelling….

The performance is created as part of the project “Sign & Sound Theatre Еurope”, co-financed by the European comission under the program Creative Europe. Other premiers of the same play are being prepared by our colleagues in Belgium, UK, Portugal and Croatia.

Our project officially started at a kick-off meeting in Zagreb, Croatia on Tuesday 12 and Wednesday 13 September 2017.

This was the first opportunity for Art Directors from the consortium to meet with Eero Engqvist, the author of “Kukunor” – the play we will produce new versions of in the UK, Belgium, Portugal, Bulgaria and Croatia.

Project managers from all partners also met with Ivo Peeters, head of the consortium, to discuss how the project will go forward.

Thank you to Centar za Kulturu Trešnjevka for hosting the meeting!